I can say with some confidence that Ahab are among my favourite bands. A band who have managed to capture my attention again and again, in different ways, but always ding so positively. First with the churning, engulfing atmosphere of their début - a doom record widely considered essential. Then with the blissful mournfulness of "The Divinity of Oceans", followed by the more experimental and unusual leanings of "The Giant". Each record has had its own distinct character, and yet the band have consistently managed to deliver works which not only please my ears, but have delivered me through hard times, and into calmer seas. "The Boats of the Glen Carrig", consequently, has been one of the albums this year that I have been most excited to listen to. I haven't listened to much else since it was released... 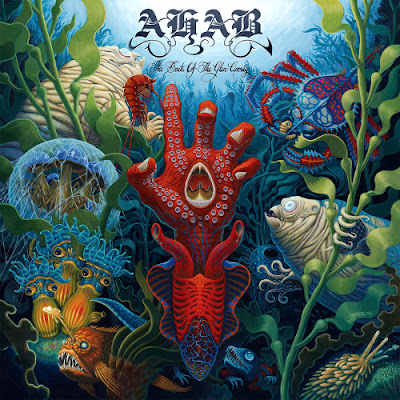 "The Boats of the Glen Carrig" is once again - as ever - a concept album. Based on the novel of the same name by William Hope Hodgson, which I happen to have read. In fact, I read it specifically because I discovered that Ahab were making an album about it... I read Poe's "The Narrative of Arthur Gordon Pym" under the same circumstances; both are excellent, might I add. Regardless, reading the source material certainly increased my anticipation for the records release, gifting the soundscapes later to be experienced with a pre-existant grasp of the book's atmosphere and narrative. In true Ahab fashion, the material lends itself to the bands music - and vice-versa. Ahab tend to write music which suits their source-material. "The Giant" is a relatively ethereal and strange record by their standards, and it's definitely no coincidence that the book on which it is based is itself a very strange one, particularly towards the end. The record reflects its source material. So too in the case of this record; the ugly strangeness and threatening denizens of the lands through which the characters in "The Boats..." travel are extremely well brought to life by, for instance, the crawling, jarring elements of "The Thing that Made Search" or the despair of "To Mourn Job". In short, Ahab have always been in the evocation game, and they continue to excel in so doing.

More conventional than its predecessor, "The Boats..." is steeped in Ahab's familiar crushing and absorbing style, with somewhat less overt experimentation and glittering sublimity - perhaps to the approval of many, although I consider myself a huge fan of both works. Behind perhaps the début, with its unique, almost one-of-a-kind tone, "The Boats..." sits very high on the table of heaviness; at times more crushing than a considerable swathe of the bands back-catalogue - and effectively done, too - a return to the reconciliation of potent atmosphere with the crushing waves of doom; the softer parts do not feel at odds with the heaviness around them. Arguably, in fact, it is something of a refinement of the Ahab recipe; the twisting, oceanic leads and tumbling riffs remain strong, while the clean-vocal crescendos once again steal the show at times, creating moments of sublime and incredibly powerful beauty, particularly during "The Weed Men" - host to one of Ahab's finest moments, as far as I'm concerned, and perhaps the stand-out track on the record. The album as a whole could pleasingly be considered to deliver not just some but all of the elements which made past Ahab records great; the murky and claustrophobic atmosphere of the first; the almost operatic uplifting power of the second, and the spirit of experimentation from the third record. The colourful artwork may have worried some, but when the day came, Ahab brought forth a record as strong as any they've made before - every bit as well-written, constructed, and played.


Often, the more you're invested in a band, the more paranoid you become about them slipping-up; to many of us, bad records feel like an inevitability, and we fear them as such. One can never say never, after all... but for everyone worried about Ahab releasing a sub-standard work, "The Boats of the Glen Carrig", from its most crushing riff, through to its most ecstatic and cathartic soft-section replies with a resounding "Not today". The fourth album is a strange place for any band to sail through, but Ahab have navigated those weird waters well.