Nocturnal are a German black-thrash band who's logo was featured in the artwork of Darkthrone's Dark Thrones and Black Flags album - which, as far as I can recall, is how I discovered them. In any case, black thrash is one of the genres I've always been eager to explore, and a few years ago I discovered the bands first two records, "Arrival of the Carnivore" and "Violent Revenge", both sturdy offerings of old-school goodness. At that time, it had been a while since they'd released a record, and since then, I'd been keeping an eye open for a third album. As luck would have it, such a record arrived in February. By July, I've finally managed to get around to buying a copy, and, several spins later, the review begins. 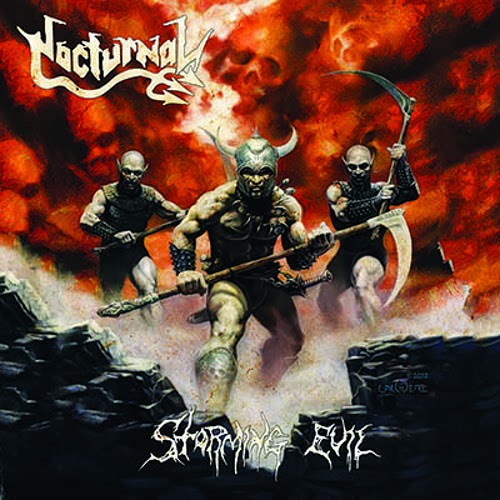 The arrival of a new record  has, without a doubt, re-kindled my interest in Nocturnal. For quite a few months before listening to it, I hadn't listened to either of the previous records in quite a while. Now, however, I'm enjoying approaching the band with a fresh enthusiasm, really listening to the records properly, and giving them time to soak in. The experience is made all the more rewarding and enthusing by the fact that, by my reckoning, Storming Evil is the band's strongest album yet, not only capturing the old-school ferocity and evil vintage sound which defines the band, but also then upping it to a new level of thoroughly good execution. It's energetic, face-melting and vicious; the playing is tight, and the production suitably gnarly and earthy, but likewise clear enough to allow the album to shriek it's message with lucidity- in fact, the production job, and perhaps changes in the chosen tones and styles of the musicians involved, has rendered Storming Evil the sharpest and most scathing Nocturnal record yet. Musically, too, the album feels like a real triumph. The guitar work is intricate and agile, with weaving lead-sections busily populating almost every track, giving the whole thing a frantic feel which really captures the energy and staggering mania of thrash, while the twisted notes also imbue the whole album with evil, a job which is complemented thoroughly by Tyrannizer's vocal delivery, which is not only well-constructed in terms of patterns and hooks, but also has a near demonic level of reverb, giving it some extra Satan.

Storming Evil is a good ten minutes longer than either of the bands previous records, and seems to benefit from it. The album has a longer time  to sink in while listening, and the songs themselves - numbering ten, as with both of the previous albums, pick up the difference in length, which has lent itself to more elaborate song-structures. Indeed, while the record retains the band's unapologetically raucous approach - still characterised foremost by dirty, evil and fast music, it also finds room to accommodate elements which lean towards being a little more grandiose; There are songs which really make use of atmosphere, lower-tempo sections, and so forth. By my reckoning, the album is gifted with a sense of presence and weight through this, and the use of everything from all-out blasting at its most intense, right through to fist-pumping, head nodding swaggering sections results in a dynamic album, and one which is very absorbing to listen to - it succeeds in one of the main quests which an album must succeed in - making you want to listen to it. The first two records by Nocturnal were very enjoyable - in many ways as good as this one,  but this one feels like a larger undertaking, it's more momentous, perhaps a little fuller - more striking. All in all, the album very much gives the impression of a band who have gotten into their stride, and with the resultant momentum, have hit their most powerful hammer-blow yet.


There's something about third albums - a certain pressure on the band to create something which lives up to - perhaps even exceeds - their previous body of work. It does seem to be the point in a bands career where their fans begin to have very tangible expectations, especially when the band are well established already. It's enjoyable indeed to hear an album which lives up to personal - and general - expectations, and Storming Evil has done precisely that. It met my expectations, and indeed exceeds them. I'm very impressed.