When I first discovered extreme metal, I wasn't able to listen to bands like Immolation properly; they just seemed so, so heavy, to the point that I couldn't discern what was going on in the music. With what I suppose is a degree of foresight, I put them aside for the time being, deciding to re-visit them when I was better versed in death metal. On a whim, I decided to listen to Dawn of Possesion earlier this week, and it was immediately clear that my taste had matured enough to enjoy the album properly. Thus, the review begins... 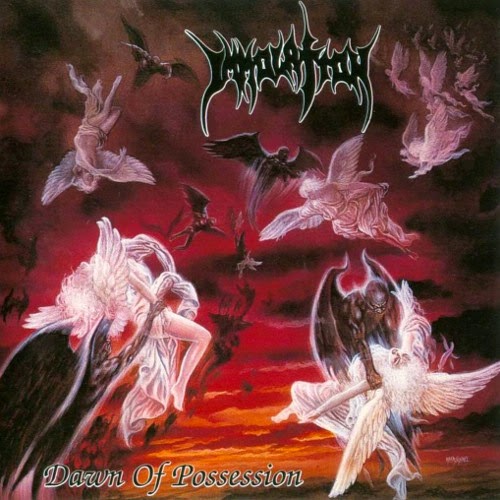 As an album, Dawn of Possession bursts into life right off the bat. For me more specifically, the record's beginning, this time around, was also a burst of "Oh! Now I understand". Cacophonous, cavernous riffs seethe and rumble below a crisp surface of frantic but accomplished and intimidatingly tight drumming, and vocals delivered from the pits of hell. In short, all of the goodness which I would previously not have had the ear to really appreciate until these last few years. It might seem very obvious to praise the record on its leaning towards "old-school death metal" - after all, that is precisely what it is. However, records like this one go above and beyond the call - this is not any such album, but one which very legitimately stands as a pillar holding up the notion of what death-metal bands both then and now aspired to create. The churning, dry but deep guitar tone is one which is unmistakably associated with the genre, often emulated, and to my ear now, generally appreciated. I tend - or at least, tended - not to enjoy super dry, dusty production, but Dawn of Possession keeps a good middle-ground between being a sharp and blunt instrument; neither a knife nor a club, but a barbed-wire-baseball bat of unholy writhing. Combine this with the atmospheric leanings which the album indulges in, and what begins to be unearthed is a winning recipe for dark, oppressive death metal.

The lead sections on the record - or, at least, the sections where lead guitar is emphasised - are often the climactic moments of songs, and certainly, in the throes of some of the solos, the songs seem to capture what old-school death-metal - or as far as I'm concerned, death metal in general - is all about. Of course, the album also offers crushing, pulsating riffs which are extremely fun and powerful on a non-atmospheric level -  it's worth remembering that plenty of bands try to go too far the other way, and create songs which, while atmospheric, don't do especially much. Dawn of Possession doesn't fall for this, instead, the songs are very substantial. Notably, however, the record offers a maelstrom of depth which a lot of the more modern side of the genre simply cannot offer. The album is an assault, but an assault with the sort of subtlety that death-metal flourishes on; idiosyncrasies of playing and production which the extremely clean production which predominates a lot of death-metal nowadays irons out as opposed to promoting. Dawn of Possession is grimy, but also replete in that trademark Immolation majesty, with an almost grandiose leaning, and a wide but suffocating atmosphere, like being trapped in a storm - but a vast storm. The record remembers depth, but, likewise, the record can't be criticised for being so deep as to be void - a superb balance between texture and dynamic sound.


Immolation, for me, have been a lesson in patience - we begin listening to metal as mere musical children, and we can't reach the high cupboard to get the best cookies. As we listen to the music we love, we grow in height, until one day, music like this is within our grasp, and it feels extremely rewarding to hear the band with refreshed ears, and new insight. The band which I just couldn't get into years ago is now a solid favourite.