Death metal is - in the grand scheme of my journey through metal - one of the later sub-genres that I discovered. I mention this fairly often. Consequently, it still has among the largest selection of "essential-listening" bands that I have yet to explore fully and properly, or have only got around to listening to fairly recently. While in the last few years, I have gone from a very rudimentary understanding of the genre to a slightly broader appreciation of it, there remain plenty of gaps still to be filled in the path towards seeing the bigger-picture. One such gap was, until recently, one of the titans of the early Florida death metal scene; Obituary. 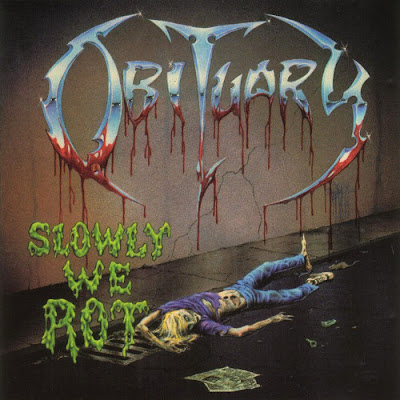 The interesting thing about listening to a band as influential as Obituary so late-on is that I've ran into a number of bands who were heavily influenced by the style before listening to the originators. In fact, in my understanding of death-metal, there was an exactly Obituary-shaped gap... which means that by the time I'd listened to a couple of records - namely the first three - I reached the conclusion that Obituary were more or less exactly the band I expected them to be, sound-wise. The consequence of this, among other things, is that by being so... expected... "Slowly We Rot" has left me in a state of indecision. Has discovering the band after listening to a fair bit of death metal already demystified their appeal and impact? The fact that Obituary embody not only most of the hallmarks of classic death metal, but almost all of the hallmarks which I genuinely enjoy seems to contrast with the fact that I'm discovering a band at a point in my listening where I'm almost jaded and desensitized by a number of the conventions of the genre. Of course, Obituary were more a convention setting band than a convention upholding band... but nonetheless, at times it feels like I've been unfortunate in listening to so many bands who follow a similar style first, as opposed to being blown away by discovering Obituary four or five years ago. That's an issue which has nothing to do with Obituary's music however, and everything to do with my taste, as a time-line. The fact I'm not blown-away by Obituary is entirely my fault for listening to them at - arguably - the wrong point in my exploration of the genre.

Music is, in many respects, a subjective experience, but I do think it will prove worth my while to try to skim the jaded feelings out of the way, and try to focus more on the musical substance of "Slowly We Rot" itself, for while I perhaps wasn't in the correct mood to be excited by it, there is certainly a swathe of elements in the record to be excited about. The rude, power-tool tone and well-cobbled riffs both ooze with a huge Celtic Frost influence - perhaps the most overt of any of the classic death metal acts, with the same rewarding effects; a lot of the tracks depart from their thrashy roots to deliver a crushing and dripping malignity, as the record romps through everything that old-school death metal does best. It succeeds in being intense, heavy, and above all, slightly-scary - probably even more so in 1989. It's the natural step-up from the early work of bands like Death, which was less of a progression stylistically from thrash. Indeed, you can very much appreciate the natural move towards extremity in the twilight-years of thrash-metal, as expressed sonically on a record like this. The merits of the record, in this light, are multitudinous; representing a step in the codification of death-metal into a genre, with its fantastically over-the-top heavy tone and crushing tracks. While to me, Obituary might prima facie feel like a chapter I accidentally missed, in a book that I managed to follow the plot of anyway, that does not mean that the chapter is without merits; quite the opposite. "Slowly We Rot" is splendid.


In my mind, Obituary is still a newcomer to the nexus of my musical taste. With time, however, I have confidence that the music will sink-in more fully, and open itself more readily for my appreciation for its own merits, as opposed to any extraneous baggage which the bands context in my musical journey brings. I look forward to being able to enjoy "Slowly We Rot" more fully with time, and for all of my discussion above, my appreciation for it is already growing. While my brief forays into their later work are considerably less promising, their early work is a growing dot on the map of my love of old-school death metal.

As far as I know, the metal-scene in Italy never quite hit the heights of many of the others countries in Europe, at least in terms of producing well-known bands. Most people who have been into metal for a while could name half a dozen German bands... Sodom, Paradox, Running Wild, Kreator, Desaster, Blind Guardian... it's not too difficult. I'm not so sure I would succeed in doing the same with Italy... at least, not without a much longer pause to think about it. But what Italy seems, at least prima facie, to lack in terms of hard-hitters in the genre, it certainly seems to make up for in terms of quality. I don't need to list half-a-dozen Italian metal bands just now, and the reason why? Mortuary Drape count as at least seven, single-handedly. 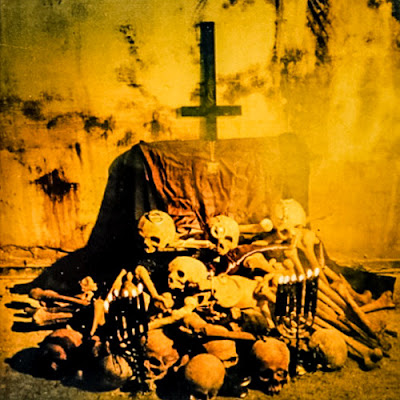 It's a difficult task to think of one word or phrase to describe Mortuary Drape, such is the extent to which the band's sound is a vast and chimerical one. "Secret Sudaria" is no exception, and seems to do its utmost to bring a huge and diverse range of elements to the table. Indeed, it's almost confusing as a listener when one tries to decide which paradigm to listen to the music in. Fun, or grim? The only answer seems to be found in trying to take stock of everything at once. Rapid-picking and thrashy sections appeal to the old-school 80's thrash sensibilities in their sharp and athletic sound. Frequent d-beats and prominent bass then varnish the album in an almost Motorhead-esque sheen of filth and cruising nastiness, elevated further by the evil but extravagant solos. The rumbling and jagged riffs are among the best I've heard in any sub-genre of metal, reconciling the dynamic riff work with a cavernous and morbid atmosphere, particularly in the world-devouring vocal delivery. Infectious though much of the album may be, it still looms over the listener with infernal and malign intent, vomiting-forth from the grave with malice, for all of its bounce and swagger. It isn't doused in "necrosound", but it carries a distinct and flavoursome evil in its veins - it doesn't need to be scathingly raw.

The dominant elements of death metal and black metal likewise interact in interesting ways throughout the running time of the record, with the album maintaining an ability to writhe with the energy of old-school death metal, but also descend into a crushing and devilish darkness. It's a coming together of flavours, somehow both morbid and, for want of a better word, rocking, following-on from bands like their fellow countrymen Bulldozer in doing so. Indeed, while perhaps not the culmination - if any album could ever claim to be such - "Secret Sudaria" very much represents a buffet of some of the very best ideas and recurring tropes that metal had accumulated from its inception right through to 1997, when the record was released. It's not that the album itself is diffuse in identity, or gratuitously eclectic, either; the songs have a fixed and consistent style throughout, giving it great cohesion through its runtime. Instead, what seems to have happened is that Mortuary Drape are a band who sit so thoroughly betwixt the archetypal products of the various subgenres from which they take influence, it's impossible not to sit-up and notice the resultant amalgam. It's the sort of record which will challenge you if you try to be too meta. The most enjoyment it can offer, as writing this review has taught me, is when one listens to it without thinking too deeply into what it is, but savouring simply how it is.


Mortuary Drape have outright rocketed into being among my favourite extreme-metal acts, and with albums like Secret Sudaria appealing to more or less my every preference with regards to metal, it's in many ways unsurprising. While the band seem to be a treasure of the underground, reserved only for those who go looking, I nonetheless thoroughly recommend anyone with a vague interest in extreme metal to seek their material out.