Today, two years ago, I wrote my first review on this blog. I didn't really know how to write a full review, and I only managed a couple of vaguely coherent paragraphs. Frankly, I didn't know very much about metal at all at that point. It's fitting, I think, that exactly two years later, that I review the same band that I first ever reviewed. Conveniently, they released an album early this year that I've been meaning to listen to for a while. The band I'm talking about are Azure Agony, an Italian progressive-metal band, and their second full-length album, India. 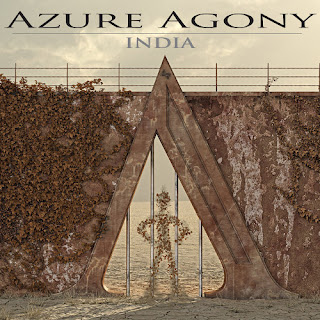 Listening to the album, it's definitely visible that the band have developed over the years since their last release. Perhaps the most notable difference is that the band now have a vocalist in tow, a huge change from their previous album, Beyond Belief, which was entirely instrumental. I can only imagine that it's a huge and difficult step to incorporate such a change, but the band seem to have managed quite successfully. Granted, India sounds very different to Beyond Belief, but at the same time, it is undoubtedly still Azure Agony. The key features, that being instantly recognisable guitar tone and keyboard melodies which make the band noticible, are still present. Now, however, the songs are laced neatly with competent, powerful and distinct vocals, often presenting memorable vocal hooks and choruses with as much skill as the rest of the band draw the listener in with progressive musicianship. The band are certainly one which I would trust to come up with interesting new material, and they deliver it well - there's as much cleverness and intricacy within the pulsating riffs and melodies of the album as there was in the last one, and, like it's predecessor, the sound manages to blend complexity with a more honest beauty, and a straight-forward air, the latter managing not to clash with the album's intricate and subtle technicalities.

In some ways, the new album isn't, perhaps, as "heavy" as Beyond Belief, with a warmer, more relaxing atmosphere frequently shown throughout the record. There's less of a sprawling, manic feel, and as a whole, the album feels more laid-back and smooth-flowing. Like Beyond Belief, however, the band make a great show of the sheer range of experimentation, and various styles which they incorporate into their sound - everything from a rock n' roll edge in places, to continental accordion work, to an ambient feel in others. There are intense, fairly heavy songs, but also songs which soar with more delicate melodies and riffs which fly high and really give the music an elevating, elating atmosphere. The band have a great grasp of crafting both intense and calm sections, but also seem to have a talent for conjoining them - the album flows between the different styles very smoothly, and there's quite a feeling of continuity between the songs through the whole album - it certainly feels like a single, complete opus, as opposed to merely a collection of songs - it strongly has it's own character, through and through. I don't listen to much progressive-metal, I must confess, but Azure Agony's brand of the style is one which I can certainly enjoy, and India is the most complete sounding record they've recorded so far. If the band continue in this vein, I can see them becoming well known.

It can often be difficult to make a second-album which properly lives up to the quality of the début, but I think I can safely say that Azure Agony have managed to do so - it shows, perhaps, that taking a little more time than the average band can absolutely pay-off.