An instrumental concept-album about the water cycle, done in a post-metal/stoner metal/doom metal style? That sound like something worth checking out, I thought to myself. Now, having checked it out, I can indeed verify that one man artist Judd Madden's debut album "Waterfall" is indeed well worth checking out. 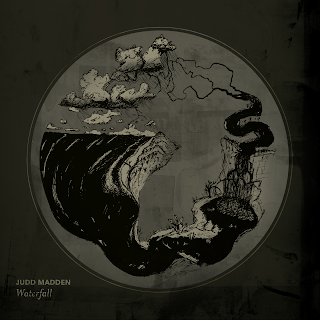 Notably, the album in it's entirety is not overtly metal in nature, with mainly the middle tracks having the characteristics of slow, deep doom-metal, albeit laced thoroughly with more experimental sounding influences, creating a bizarre and evocative soundscape. Much in the way a classical suite of music works, often explaining the concept without any use of language, "Waterfall" explores the concept of the water cycle purely in an instrumental fashion. It does so rather well, managing to evoke the attributes of each of the water-cycles stages simply through music. The album's opener "Trickles" is a soft, clean guitar piece, which truly does sound like a trickle of water would, if it was given musical character. "Ocean" sounds like ocean, with crushing waves of sound. "Waterfall" like a waterfall., with pounding drums which really gives a sense of the falling water crashing down a cliff side.

The album flows very well, pardon the pun, with each and every song blending into the one after it, which helps to reinforce the fluid, unbroken nature of the cycle which the album represents. The whole album utilises a vast array of styles, everything from doomy riffs to piano, to drone-doom style feedback and sustain. The album is certainly more akin to one large song divided into movements than merely a collection of songs, and this adds something of a sense of wholeness to the project, and the album should certainly be listened through from end to end, and focused upon, as opposed to dipped into, which I believe could render many of the songs somewhat disorientated, their place in the album dislocated. Overall though, the production and musicianship are solid, and the atmosphere is undeniably top-notch, both in terms of evocative-ness and emotion.

One of the most interesting concepts for and album which I've heard in a long time, I'd definitely recommend this album to someone who has an hour to spare, and wants to embark on a fantastic musical journey. I'd certainly suggest having the album all at once though, as I said, the songs aren't meant to stand alone, although each is good in it's own right.